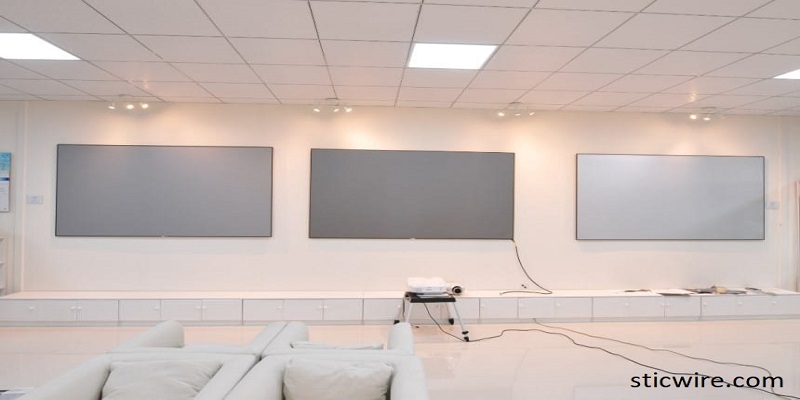 Even though the ability of a projector to display visuals on the screen accounts for its quality, the background or the screen that you are using also plays a significant role. When we think about digital projectors, all that comes to our mind is a large image on a standard white background.

But, do you ever think, what if we use a black screen instead of white? Would it make any difference? Well, there are numerous benefits and shortcomings of both the screens and it all comes down to the type of visuals you want to project on the screen.

Usually, white screens are used to project on it but there are various situations where a darker screen such as gray or black works the best. It is all about the physics of the projection of light which doesn’t need to be explained here.

In this article, we have discussed the differences between black and white projector screens and which one would be better for you in a very simple language. If you are excited to know about it, let’s dive into the details.

We can not call any one of the two screens the best without considering the important factors that can help us determine which screen works the best for each factor. The top two aspects with which the differences between the two screens can be figured out are explained below:

It is the foremost factor to consider while choosing the background screen for your projector. Everyone wishes to have the life-like color quality of the images on the projector screen so that the visuals look realistic. Surprisingly, black and white both the screens are capable of delivering an eye-popping color quality that will be closest to reality.

See also  How to clean a projector screen

But, if you had to pick only one which is best among the two, the black screen would be our recommendation. The main reason for choosing it is the deeper contrast offered by the black screen which helps the colors to pop even better.

On the contrary, the white screens also look great but, when lighter colors are viewed, some of them can get camouflaged with the screen itself. Since whiter screens do not have a much higher contrast ratio, even if you don’t lose the lighter color, you can possibly lose their details. Moreover, the darker colors of the image might look washed out a bit.

Blacks screens are not perfect either and there could be many areas where the image produced is extremely bright. One downside of these screens is the shimmering effect. Moreover, just what happens with the details on the white screen can happen here as well. When darker colors appear on the black screen, the details might be lost.

However, it is better than having a poor contrast ratio but what it actually tells us is that black screens are not 100% accurate as compared to white screens. As mentioned above, both have their pros and cons.

It is another major difference seen in the black vs. white projector screen. The very common reflective property of these two colors is that black absorbs light whereas the white color reflects it back. This is exactly why it is recommended to wear black-colored clothes on colder days and lighter colors on humid days.

When it comes to the white screens, a significant amount of light is reflected back from the screen which can be considered a good as well a bad thing simultaneously. Why we call it good is because it offers an amazingly wide viewing angle which means that even if you see the screen from any odd angle, the colors would appear the same and the image will be clear.

See also  Can You Plug A Firestick Into A Projector?

But, what makes it worse is that it illuminates the entire room up. So, if you wish to enjoy a movie night in a darker surrounding, unfortunately, you would not be able to experience it with a white screen as a projector background. This will also reduce the already lower contrast ratio and you will not be able to see the details clearly.

It is good because you won’t get brighter surroundings so that you can enjoy a dim-lit movie night. In addition to this, the light absorbent property also lets you watch the visuals with utter clarity even when the daylight is peeping through the windows.

But, its downside is the limited viewing angles. This means that people on the sides would not be able to see what is going-on on the screen and only those sitting right in the front of the screen would get clear visuals.

Is the grey screen a better option? 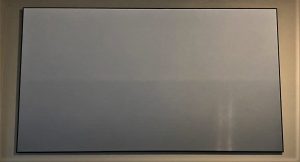 Grey being an intermediate shade of black and white provides great benefits and exceptional image quality. Since it features the elements of the black and white screen both, it can provide you with better contrast and decent reflection. Moreover, you can view the screen from different angles as well and even when there is lots of ambient lighting in the room.

The final choice of black vs. white projector screen comes down to the viewing habits of the consumer. If you have a large audience to entertain, you might want to invest in a white screen so that everyone can view the screen from different angles.
See also  Can you Connect A Roku to A Projector?

However, if you have a limited budget and have a small group of family members or friends to enjoy visuals on the bigger screen, it is better to go for the black projector screen. It is not only more affordable but offers incredible display quality.